I once played in an All-Star Concert.

The ensemble was not designated as such, but it met the definition in all respects.  As you can see in the image to the right, a sticker put on the plastic jewel case containing a recording of the group’s concert attested to the fact.

On the occasion of the fiftieth anniversary of the founding of the United Nations, an orchestra–dubbed the “World Orchestra for Peace“–conducted by Sir Georg Solti, was assembled for a performance surrounding the celebration of the anniversary in Geneva, Switzerland.  For this inaugural UN concert in 1995 (there have been others since), every single one of the players Solti invited accepted immediately.  The players represented 45 orchestras, from 24 countries: 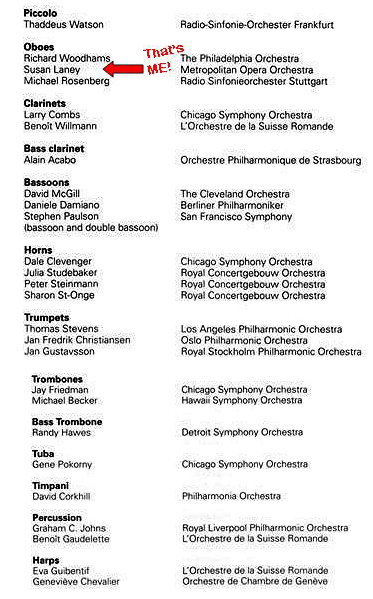 The concert opened with Rossini’s Overture to William Tell (a nod to the Swiss Tell).  It was followed by Bartok’s Concerto for Orchestra.  (Bartok and Solti were not only fellow Hungarians, but Solti was a student of Bartok.)  The concert concluded with vocal soloists and chorus joining the ensemble for the rousing finale of Beethoven’s opera Fidelio in which freedom and peace are celebrated by newly-released political prisoners and jubilant civilians.

‘…I picked the Beethoven for the qualities of brotherhood, liberty and humanity, and the Rossini overture as a homage to Switzerland, but the Bartok for a number of reasons. Not only is he one of my favourite composers, but he also encompasses the whole world: his music is very Western, but based on an Eastern culture.’ Sir Georg Solti

To get a taste of the concert (available both on video and on audio releases), watch this video clip of the William Tell Overture performance.  What a fiery and dynamic performance Solti led!  Those amazing trombones!  The delicate pianissimos!

By the way, you can catch a glimpse of me from 5:34-5:48 as I respectfully listen to the English Horn soloist to my left.

I have so many wonderful memories and stories from my participation in that event, but–like David Wright‘s wide-eyed anticipation about playing tonight on the same team as his child-hood idol Scott Rolen–one of the highlights of the experience in Geneva was performing alongside one of my idols of the oboe for as long as I had been a student of the instrument:  Richard Woodhams.  (I recently wrote a post comparing Woodhams’ illustrious oboe playing and his preeminence in the world of woodwind playing to that of Sandy Koufax in the realm of pitching.)

Subsequent World Orchestra for Peace concerts have taken place, not always with the same musicians.  Although I was again invited to participate, I could not participate beyond the initial year because of the Metropolitan Opera schedule.

But I have the CD, the DVD, and the memories of making music on a stage filled with “big league” instrumentalists from all over the world, under the baton of one of the greatest maestros of all time.

With diplomats and dignitaries from many countries (including Yasar Arafat), it was a special day and, truly, a red carpet event.  Speaking of which, I’m going to now watch the Red Carpet parade of All-Stars in Ahaheim, followed by the All-Star Game itself.