The excitement of sighting Gary Cohen in the boarding area of LaGuardia, sitting in the seat directly behind him on my flight to Pittsburgh a week ago yesterday, and then ultimately speaking to him at baggage claim in the Pittsburgh airport got my Pittsburgh/Mets road trip off to a very exciting start, no doubt about it!

After that, my family and I were off to National car rental to pick up our rental car where something fun–okay, not NEARLY as exciting as the previous few hours, but fun nonetheless–awaited us as well.

Whenever we go on vacation and require a rental car, my husband Garry almost always defers to me when it comes to actually selecting the vehicle itself.  I’m not sure whether that’s because (1) he rents a car every week when he goes to work in Washington, DC, and thus any entertainment that existed in the selection process disappeared for him long ago or (2) he recognizes that I will be doing the bulk of the driving (our usual arrangement) and as the principal driver I might want some say as to the type of automobile I will be driving.

I do know that if make and model of car is not a major consideration, he and I both like to select a vehicle that is equipped with XM satellite radio since XM carries virtually all Major League Baseball games.

But something extra-special–at least in my and my daughter Melanie’s eyes–was parked and available on the Emerald Club Aisle as a possible selection last Tuesday morning:

While we kept the top up for our trip into town from the airport, the beautiful weather practically demanded that the top come down as I drove my family around for a little sight-seeing in the Pittsburgh downtown area before batting practice.

We started out along the bank of the Allegheny River across from which one can see right into the beautiful new PNC ballpark.

We drove by the Westin Convention Hotel.  That is the hotel where the Mets were staying.  We hoped to see some of our guys heading out for a snack before it was time to go to the ballpark or something, but we did not see any of them.

The Westin, by the way, is the former Vista Hotel.  The Vista Hotel opened nineteen years ago when I lived in Pittsburgh.

At that time, I played as a member of the Con Spirito Woodwind Quintet.  It was as a member of that quintet–hired by the Vista Hotel to play one night a week in its lobby–that I often saw Major League ballplayers from teams in town to play the Pirates strolling through the lobby.

I really shouldn’t make connections like this, I know, but when I was one year out of graduate school and struggling to make ends meet as a young, single professional musician playing gigs like that in Pittsburgh, Jose Reyes was no doubt already running and sliding in the dirty sandlots of the Dominican…at age five.

With still more time before the gates opened, I took my fellow Mets fans to the Oakland area of Pittsburgh to the campus of University of Pittsburgh where part of the old Forbes Field still stands. 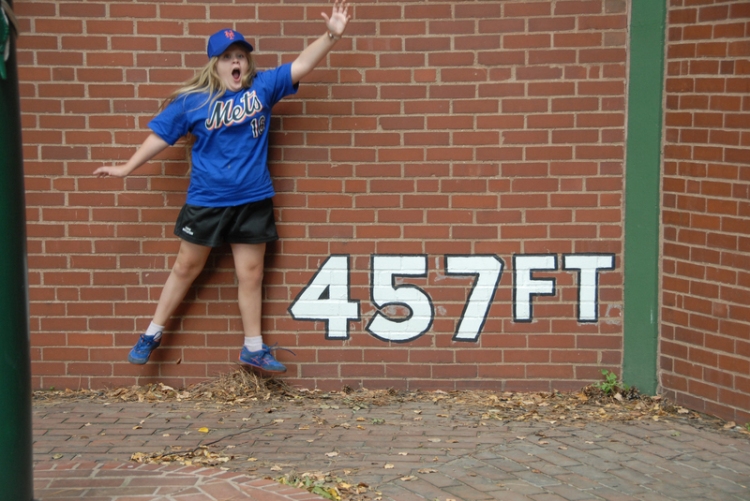 My daughter Melanie even tried to stage an "Endy Chavez catch" in an attempt to scale "Maz’s wall".

This is the nickname given to the remaining wall of Forbes Field, so called because of Bill Mazeroski’s home run over the left field wall that won the World Series for the Pirates in 1960.

More on the Pittsburgh road trip as well as the Washington, DC, road trip that followed in further posts!