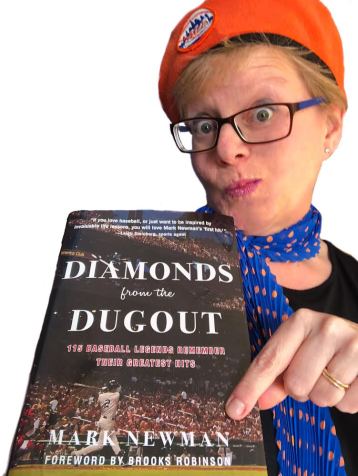 I’m the proud friend of several prolific baseball writers.  In the past, I’ve referenced here the fine work of Greg Prince and Jason Fry   My seat for Mets games is in Section 318–right in front of the WOR-710  Mets broadcast booth.  Over the years, the fact that I always have the Mets Booth radio guys in my ear during games–and often pantomime my reactions to their always insightful and entertaining commentary–and that I regularly trade tweets with “the immortal” Chris Majkowski during games, have resulted in a friendship with the radio personnel, including sportscaster and author Howie Rose.

Mark Newman does not write about the Mets exclusively, but he has spent a fair amount of time at Citi Field.  He has been a longtime Hall of Fame voting member of the Baseball Writers’ Association of America.  He is the recipient of the National Magazine Award for General Excellence.  He has worked twenty-five World Series for Major League Baseball.  It was through his position with MLB’s Advanced Media–for which he is currently Enterprise Editor–that I got to know him.  Mark was a guru/”cheerleader”/problem-solver for all of us novice fans starting to blog about our teams for the first time.  He was most helpful in providing guidance, encouragement, and helpfulf feedback to this Mets blogger. Since starting Perfect Pitch, I’ve had a chance to share some memorable games with Mark at Citi Field, and he and his wife Lisa have attended a few Opening Night Galas at the Metropolitan Opera as well.

Suffice to say, Mark has been around baseball and is accustomed to posing questions to ballplayers.

But for almost as long as I’ve known him, when he’s not involved in a specific work assignment for MLB, Mark’s been meeting one-on-one with players in pursuit of their answers to a single query:  given the opportunity to cite a single at-bat as the most memorable of your career, which one would you choose?

He’s talked to current players, players who retired long ago, and Hall of Famers.  He’s met them at batting practice, at foundation fundraisers, on golf courses, over lunch, dinner, or a cup of coffee–any number of scenarios that afforded the time and place for a bit of introspective reflection, “off the record” and away from the player’s team, his family, and the public.

The resulting answers, Mark found, were intriguing, fascinating, and quite often, they came as a surprise.  A publisher had the same reaction.  A book, entitled Diamonds from the Dugout, envisioned and written by Mark–with encouragement from Brooks Robinson–is the happy result.  It came out just this week.

Fans, the media, statisticians, bloggers, and baseball historians have time-honored criteria for quantifying or qualifying an individual athlete’s performance relative to his peers.  They are also afforded their respective platforms for self-cultivated “highlight reels” of their own selection.  Some of the crowning points shared with Mark by these ballplayers might be seen as relatively unremarkable, from a strictly baseball point of view; what is noteworthy is the reason why this is the hit selected by the player himself and given its own chapter in Mark’s book.

The subject of each chapter is certainly a measure of athletic accomplishment, but more often a player’s selection had more to do with the context in which the hit was made. Mark skillfully weaves together the specifics of the play with anecdotal information from the player.  Reading these vignettes, one can easily visualize the whimsical grin playing across the face of a player or the slight misting up of a player’s eyes involved in the hit’s memory and his retelling a story that, for that player at least, has obviously become the stuff of myth or legend.  The inclusion of each player’s “back story”, the opportunity for him to “set the stage” and to add personal embellishments to his saga:  this is what makes the book fascinating reading.

The book is a veritable Who’s Who of baseball royalty, but as a Mets fan, you’ll particularly enjoy reading chapters devoted to David Wright, Mike Piazza, Ron Swoboda, Mookie Wilson, Darryl Strawberry, Rusty Staub, Ed Kranepool, and Ralph Kiner.  I particularly liked Staub’s tale involving a multiple-hit game as a young player for the Astros in May of 1967.  The legendary Ted Williams was in the house–not as a player, but as an award presenter.  Williams had scouted Staub in high school for the Red Sox, and on that day, he witnessed Staub go 3 for 3 with a run scored in the 6-2 victory.  Staub recalls that his efforts that day garnered words of high praise from Williams that he remembers vividly to this day, “You’re gonna be OK, kid.”

Conversely, Mets fans will enjoy Chipper “Larry” Jones’ favorite hit for the mere fact that it did not take place against Mets pitching. Considering the plethora of killer at-bats inflicted by him upon my team, I was relieved to find that his chapter does not constitute a nostalgic recounting of a nadir of Mets family lore.

It’s a hard time for Mets fans:  we had high expectations and low return this season.  Meanwhile the team across town has powered its way to the ALDS.  Trust me, there’s no better time to get lost in a book, if you’re a Mets fan.  And I highly recommend you pick up a copy of Mark’s book today!

UPDATE:  The hardcover edition of the book is once again in stock at Amazon.  For shoppers in the New York City area, Barnes & Noble stores expect to have the hardcover available in its tai-state area stores and for free delivery to select area zip codes by Wednesday, October 11th.

NOTE:  , it is available on Kindle for instant download.  The hardcover edition is currently available on Barnes & Noble’s website , and it is also available as a download for Nook.

For more information about Mark Newman and his book, please check out his website as well.

Press Enter To Begin Your Search
×