Unparalleled by any other sport, baseball is a game of numbers.  Of statistics.  Of quantifiable accomplishments.

In music and other art forms, measures of success or achievement are far more subjective.    There will never be a “greatest” or “best” soprano, symphony, or even composer.

With the exception of a few asterisks or footnotes, when an outstanding baseball achievement is made,  the record book is immediately updated, and the recipient and his feat are honored.  At least until the next player comes along and breaks that record.

The quantifiable aspect of the sport affords an auspicious status to players that is not available to artists.  In sports, one can be considered the reigning champion of one or numerous particular feats:  the very “best”.

One particular feat happened at Citi Field last Thursday night:  Outfielder Yoenis Céspedes became the first player ever to hit a ball into the third deck of the ballpark.  Anyone watching the 2013 Home Run Derby portion of the All-Star Game festivities will remember those bombs hit by Céspedes, including one that drilled the glass exterior of the Acela Club in Left Field.  While Thursday’s home run was calculated to have been hit 466 feet–which constituted a tie with Giancarlo Stanton for the furthest hit fair ball in Citi Field–it was an  unprecedented feat because of the sheer height of the home run.  The surprise on the fans’ faces in the third deck–where the ball landed–speaks volumes:  no one sitting in those seats ever expects to go home with a souvenir.  Not even from batting practice.

Earlier in the history of the franchise, an equally impressive bomb was hit–and immortalized.  In the third game of the 1969 season, outfielder Tommie Agee socked a ball that landed halfway up in Section 48 in the left Upper Deck at Shea Stadium.  Eventually, the spot where the ball was hit was painted.  Unfortunately, during the demolition of Shea Stadium, the marker was removed and was sold to a private collector.

The stadiums that have chosen to place physical markers where players have hit home runs are numerous:

Veterans Stadium in Philadelphia at one time had markers for home runs hit into the left-field upper deck by Greg Luzinski and Mike Schmidt.  A home run by a non-Phillie, Willie Stargell of the Pittsburgh Pirates, even warranted a marker there:  a yellow star with a black “S” in the middle.

RFK Stadium in Washington, D.C., boasted numerous seats painted white–against the prevailing sea of yellow seats–denoting places where Frank Howard, a.k.a., “The Washington Monument” and “The Capital Punisher”, hit home runs during his tenure with the Washington Senators.

Baltimore’s Camden Yards has countless markers embedded into the pavement for those homers hit onto Eutaw Street.  But in this digital age, they even have an online “Eutaw Street Home Run Tracker” where one can watch the arc of all 85 homers (at last count), that has landed there.  Two orange seats reside there as well:   the first was installed in honor of Cal Ripken Jr.,’s record-breaking home run on July 15th, 1993, in which he passed Ernie Banks for the most home runs ever hit by a shortstop.  The second orange seat marks the location of Eddie Murray’s 500th career home run of September 6th, 1996.

Camden Yards’ predecessor–Memorial Stadium–commemorated Frank Robinson’s monumental homer of May 18, 1966, which sailed 451 feet over rows of bleachers and out of the ballpark.  This feat was commemorated by an orange banner over the left-field bleachers with the single word “here” printed on it. 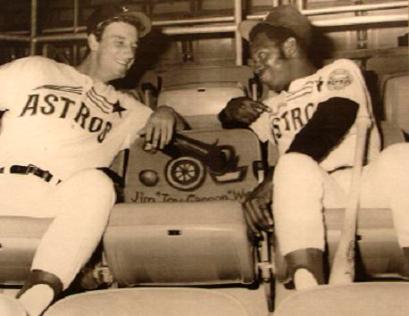 Houston’s Jimmy Wynn and Doug Rader each hit homers into the left field upper deck at the Astrodome in 1970. The home runs were hit a week apart and to the same row in the upper “Gold Level” with just a few seats separating them. The Astros had an artist paint the seats to mark them. They remained in place until 1985 when the seats were refurbished and repainted to match the blue, red, orange and yellow of the Astros rainbow jerseys (which ironically they stopped using just two seasons later). The seat locations were remarked during the renovation.

Obviously, there is precedent for honoring a ballpark’s history, long balls hit by franchise and non-franchise players alike.  Melanie Spector, my daughter and companion in Section 318 of Citi Field for practically every home game, has come up with an idea about honoring Céspedes’s third-deck bomb.  She’s even created an online petition to try to make this idea became a reality.

According to WOR’s Howie Rose, it took twenty-five years and some inquiries from Rose himself to see Tommie Agee’s marker get painted.  With your help, perhaps Yoenis–and Mets fans–won’t have to wait nearly as long to see this epic home run get an appropriate commemoration at Citi Field.

Please sign the petition, send it to friends, and post it on social media, using the hashtag #PaintItYellow!  You can find it here.