One of countless things I love about having a career as an artist is being afforded the opportunity to personally observe an individual’s perspective–my own or that of a member of my family or a friend–with regard to a particular work of art and how that perspective can change over time due to any number of reasons. With repeated viewings or listenings, and thus familiarity, it is to be expected that one’s response to and estimation of any work of art is altered. But more intriguing to me is that one’s interpretation of a work can morph for contextual reasons unrelated to the artistic experience itself: events in one’s personal life, the current political climate, or even the season in which the experience takes place.

If it’s an opera we’re talking about, one obvious catalyst for edification can simply be seeing and hearing a different cast sing the same opera.  Also, because the conductor leading the proceedings can greatly influence a performance, and thus one’s response, the same could be said of seeing the opera led by a different conductor.  Likewise, seeing the same opera in another production or in another opera house can elicit a revelation.

Often, as a performer, I find I am able to gain perspective from those in the audience.

As I write this, I have now performed the first of seven scheduled performances of the gargantuan (time-wise, anyway) opera Die Meistersinger von Nürnberg by Richard Wagner. Anyone who knows Wagner knows that he would never use one reiteration of a theme when ten would do. “Ah, but it’s in the subtle ways he changes those themes!” say fans; detractors cite physical pain and serious time commitment as deterrents to their enjoyment of his works.

I happen to love playing Wagner. He wrote beautifully for the orchestra and, for those who delve into the score, there are all kinds of “hidden”, often humorous, asides and commentary upon the characters and actions onstage from “voices” within the orchestra. Many times the orchestra functions either as a character itself or in the role of revealing an unknown truth about a character. Fascinating stuff!

That said, Meistersinger is truly one of the most challenging works that we play as an orchestra if for no other reason than its duration. There are operas that are almost as long, Götterdämmerung for example (by Wagner…who else?), but the difference is that the first act of Götterdämmerung lasts a little over two hours. The two acts following it are proportionally not nearly as long. 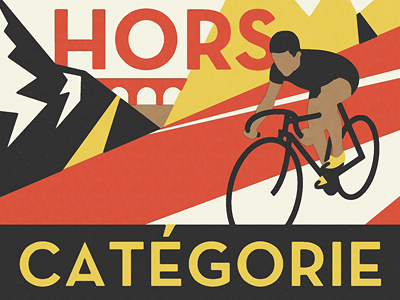 In the case of Meistersinger, it is the final act that is the long one, clocking in at over two hours.

I like to compare the challenge of playing Meistersinger to the Tour de France.  Ever notice how those god-awful hills are often near the very end of a day’s exhausting stage through Les Alpes? Climbs are assigned difficulty incrementally from Catégorie 4 (easiest) to Catégorie 1 (hardest).  But then there are those mountain passes that are even more impossibly steep and/or the cyclists approach them at such a late time in the stage–when they are most fatigued.  These climbs are considered beyond even the challenge of Catégorie 1 and are termed hors catégorie, or “beyond categorization”.

I played Meistersinger my first season and have played every single performance in every revival that has taken place in my twenty-two seasons at the Met.  It is not news to me that it is a marathon.  But thanks to two separate events this week, I have a slightly different, and welcome, view of the challenge it presents to audience members.

(1) Prior to the 6PM curtain of Die Meistersinger this past Tuesday, our piccolo player Stephanie Mortimore, was on the subway going to work. A few violinist colleagues happened to board the same car and a discussion about the impending long evening of work ahead ensued. Eavesdropping on their conversation, a woman who was obviously on her way to the Met as well commented to the musicians that she and her companion were not anticipating that that they would make it to the bitter end. “Well, it’s not like we have a choice,” Stephanie replied with a smile. Apparently, the fiddle cases had not registered with the couple, so Stephanie explained. “We’re in the Met Orchestra. We’ll be there for the WHOLE THING.”

(2) Then today, friends of mine composed a blog post detailing their personal experiences surrounding this very same performance. It happened to be their first time to ever see the opera. I found their post witty, knowledgeable, and insightful. I particularly liked the way each of them mentioned preparations they had made in advance of the performance–professionally as well as personally–in order to maximize their stamina and longevity for the siege ahead. In spite of their precautions, however, back pains and worries of deep-vein thrombosis marred their experience at least somewhat. They were suitably proud to report that they, unlike many seated near them in the Dress Circle, had not only made it to the beginning of Act III but were still there for the climactic Festwiese at the very end.

The thought had never occurred to me, I suppose, that those in the audience do have the option of leaving before the end of the opera and that this could be either a premeditated plan or that they could fuggi on a whim.

Trust me, I am aware that audiences often high-tail it out of the opera house if they don’t like the production or the singing that night or if they become physically ill or if they just find themselves tired after a long day at the office. I get that.

But what I had failed to think of before was (1) how daunting some audience members apparently find attending this particular opera–enough so to give a disclaimer to strangers on the subway or (2) how having attended this opera in its entirety clearly bestows certain merit.

My next thought was that that sense of personal pride and accomplishment should be encouraged and even rewarded in some tangible way. Perhaps those exiting at 12:10AM or so could have their tickets stamped by ushers upon their exit.  Later, these “survivors” could go to the Met Opera Shop and present their stamped ticket stubs in exchange for a pin or a T-shirt proclaiming “I SURVIVED DIE MEISTERSINGER!” or “MEISTER OPERAGOER” or some such sentiment.

Heck, why limit it to Meistersinger, though? What if those hard-core operagoers who sit through an entire opera of five hours’ length or more were to have their time, effort, and devotion acknowledged in some way? I’m imagining a Passport-like booklet to be given to audience members at performances of great length and each opera being assigned a unique stamp or sticker to be affixed that would only be made available at the conclusion of the opera.

But hundreds of words later, I must acknowledge that this is supposedly a blog devoted to baseball, and believe it or not, this post does in fact have a baseball tie-in:

This idea of a special memento being given to the most dedicated of opera enthusiasts was inspired by my knowledge of similar incentives given to die-hard baseball fans. The former ballpark of the San Francisco Giants, Candlestick Park, was infamous for its many bitterly cold games, primarily due to its proximity to the San Francisco Bay. In an effort to encourage the continued support of the team by the fans, management came up with the “Croix de Candlestick”.  In the event of a night game that went into extra innings, those die-hard fans who stayed until the bitter(ly cold) end, were presented with this personal badge of honor upon exiting the ballpark.

Opera and baseball are performed/played to a fan base. Many of those fans are regulars and often make personal sacrifices to be in the house/stands for prolonged periods of time.

Shouldn’t the audience members themselves share in the accolades at the end of a long performance?

If you are in the audience at one of the Meistersinger performances in the upcoming weeks and you see me clapping in the pit at the end, please know that I am applauding YOU as well as the cast.