How many times have we heard that expression?  It has certainly proven true recently in this house of Mets fans.

The high praise recent lavished upon my husband–while certainly well deserved–is owed, in part at least, to coincidence and excellent timing.
A die-hard Mets fan basically from the infancy of the franchise, my husband never appears happier or more youthful than when attending a Mets game.  He was recently rewarded handsomely for the hefty price of our Season Ticket package, not to mention the expenditure of vast amounts of his personal time spent watching the futility that is the Mets’ offense in general and with the bases loaded in particular:  he got to throw out the Ceremonial First Pitch at Citi Field.

Apparently, the designated First Pitch Thrower du Jour was unable to “go on”, and a suitable “cover” had to be found.  Citi Field officials need have looked no further.

While Garry showed no signs of being nervous about his assignment, as it got close to his scheduled performance, he did admit to a fear of spiking the ball. And ideally, he added, he would like to throw the ball so that Mets Catcher Anthony Recker would not need to leave his crouch in order to catch the ball.  However, if either scenario were to happen, he reasoned aloud, he would be in good company: he recalled how former Mets ace Tom Seaver had thrown out the first pitch at “Shea Goodbye”–the last game at Shea Stadium–and had spiked the ball.  He also recalled that when Seaver threw out the first pitch at the 2013 All-Star Game, his throw came in quite high and outside and had required former Mets Catcher Mike Piazza to leap to his feet in order to catch it.

Other than these minor concerns, Garry showed no signs of performance anxiety whatsoever.  In fact, he appeared rather poised and purposeful. (See if you don’t agree from the photo!)  Dutifully following the instructions he had been given to “follow David Wright” (!),  he strode onto the field with aplomb.  I will never forget the image of him shadowing Mets Pitcher Jon Niese. 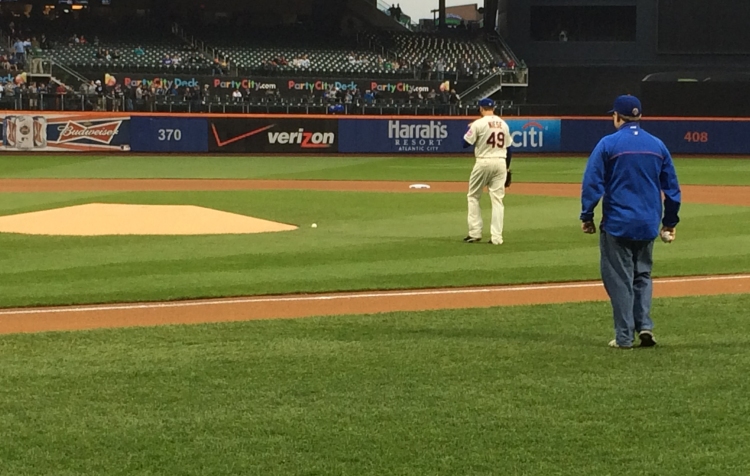 Wisely electing to throw from in front of the mound, Garry did one heck of a job, and I was not the only one who thought so.  He did not spike the ball nor did Recker need to leave his crouch in order to catch the ball.  As the two posed for a photo together, Recker even complimented Garry on his pitch.

Later that evening, sitting in our Excelsior Level seats directly in front of WOR announcers Josh Lewin and Howie Rose–with whom we delight in having as our audio accompaniment to each and every home game–Garry found himself somewhat (pleasantly) distracted from the game itself–and his usual scorekeeping ritual–as compliments kept coming in:

Friend, Mets blogger, and auteur exceptionnel Greg Prince came down from the Press Box to personally shake Garry’s hand.  (Later, he would even mention Garry in his blog post about that night!)  Plaudits for Garry’s efforts came over the WOR airwaves and into our earbuds as Howie Rose gave Garry a shout-out and a verbal “pat on the back”, adding that, “D’Arnaud would’ve framed it for a strike.”  As a matter of fact, Howie had begun discussing Garry’s pre-game experience and, before he could finish the story, he was interrupted by the Yasiel Puig Web Gem that would become a viral .gif  before the Seventh Inning Stretch.  Even after that astonishing play that had left everyone in the stands momentarily speechless and, then, had even Mets fans applauding, Howie remembered having introduced Garry’s tale, and returned to the subject. Flattering, to say the least!

Yes, timing was in Garry’s favor on Thursday, May 22nd:  He happened to be at Citi Field earlier than usual for that night’s game in order to sample “Nobu Night” at the Acela Club; therefore, he could assure Mets personnel that he would indeed be on-hand at the prescribed time.

But the fortuitous timing to which I refer was actually tied to a later event.  A few days later.

Still “after glowing” about his unique souvenir, he came home that night to find that word had quickly spread about his special opportunity, and emails demanding explanations and details were coming in at an alarming rate.  He sat down at his computer and composed a short synopsis of how the event had come about, how he thought he had performed, and the critiques he had received.  He attached one of the numerous photos that my daughter and I had each taken of him from our position on the warning track.  He then sent the email out to all potentially interested parties.

Initially, he received a flurry of emails in response .  Friday brought more feedback.  By that weekend, responses had slowed somewhat, but as the work week started on Monday, replies came from those colleagues who had taken a long weekend and not checked their work email since earlier the previous week and, thus, had just found out Garry’s news.

On Tuesday, rapper 50 Cent was given Ceremonial First Pitch honors.  And he proceeded to bring dishonor on himself, frankly.

His throw was so wildly off-course that news of this charade was picked up by national media.  Writers at the Washington Post even drew up a chart of “bests” and “worsts” in Ceremonial First Pitch Hall of Famedom to put his mishap in proper perspective. 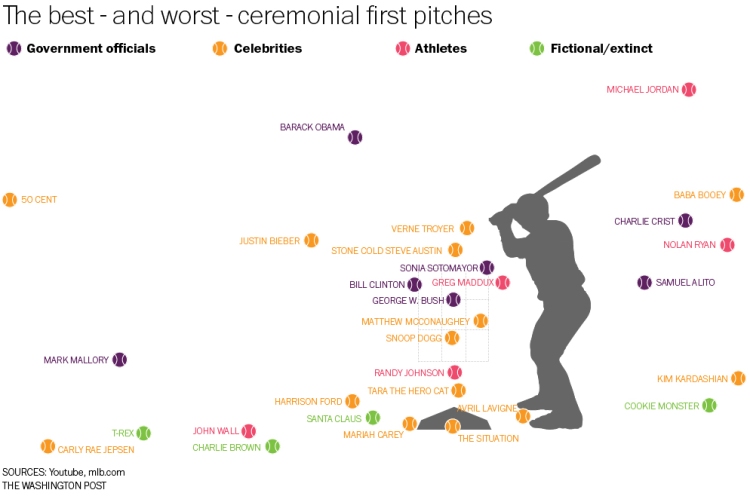 First-pitch-related emails and texts to Garry recommenced.  Friends’ and colleagues’ estimation of Garry’s feat shot up even higher.   It had become quite obvious, even to those not having seen Garry’s throw, how poorly 50 Cent’s performance had measured up to Garry’s highly-touted outing only a few days before.  Even non-Mets and non-baseball fans saw replays of Tuesday’s farce and were all too anxious to acknowledge Garry’s far superior performance.

Comparing the two men’s first pitches later, Howie Rose would even marvel–off the air–to Garry, “Grading on a curve, you are Sandy Koufax.” High praise indeed. 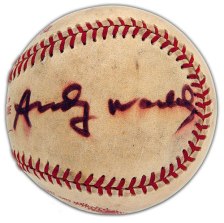 50 Cent has continued to extract from this episode every ounce of media hype possible for himself.  Recently, he provided an attention-getting explanation for his poor outing that night. He also lives in infamy in an hysterical video that has since been created in which Vladimir Guerrero is seen “hitting” that ill-thrown pitch.  Ah, but thanks to 50 Cent’s PR machine, Garry has vicariously continued to enjoy minor celebrity status, exceeding even Andy Warhol‘s predictions.

Serendipity had provided Garry the chance to live out a dream.

Coincidence allowed him to keep the dream alive for  many more days to come.

UPDATE:  The infamous first pitch throw will live on into the 2014 baseball season as Topps has confirmed that it will be issuing a baseball card “honoring” the pitch: