How to best describe Game 162 at Citi Field yesterday?

Limited to a one-word description, I guess I’d have to pick “surreal”.
In spite of the disappointing season and the very small gathering of fans (that is to say, not a crowd), those there did not seem the least bit dispirited.
The CitiField staff–from security to ushers to elevator attendants–seemed to possess that giddy “last day of school” feeling.  In fact, in talking with many of the staff with whom we’ve made acquaintance over the past two years, my family and I found out that many of them go on to work at Madison Square Garden or other venues.
The temperature at game time was in the low 60s, winds were blowing in briskly from right field, and batters for each of the non-contending teams were swinging at just about anything.  For players and staff catching flights home that night, not to mention Manager Jerry Manuel and General Manager Omar Minaya whose dismissals were likely to happen Monday (and did), the game probably couldn’t have concluded fast enough.
As luck would have it, though, the game went into extra innings.
I’d like to say that we stayed because we just couldn’t bring ourselves to say goodbye to CitiField until the very last out had been recorded, but I would be lying.
With my daughter–a professional singer–having upper respiratory issues, it seemed downright foolhardy to stay.
But we had reason to stay.  We had true incentive to stay until the last out was recorded, even–as we teased her–at the expense of our daughter’s health and singing career.
We had an inducement compelling us to stay and watch the Mets “B Team”–those playing in extra innings after Manuel pulled Wright and Reyes in a gesture to earn them fan recognition:
Prior to the game, my family and I–along with twenty-four other random fans–had been approached and asked to participate in the “Shirts Off Our Backs” campaign, presented by the Mets Marketing Department as part of its Fan Appreciation activities.  Moments after walking off the field at the conclusion of the game, each player would be removing his jersey, autographing it, and relinquishing it to be given away to a fan, the Mets marketing spokesperson told us.
The spokesperson did feel it necessary to caution us that it was a random drawing out of a hat.  “You might get David Wright’s jersey,” she said, “but you might get Joaquin Arias.”
We, therefore, could not leave before the end of the game.
We stayed through the tenth inning.  The eleventh.  The twelfth.  The thirteenth.
It was cold and windy, my daughter’s hacking cough wasn’t going away, we were hungry and the food vendors in the Caesar’s Club had closed for the day.  And still we stayed.
We began to kid ourselves that, just watch, we would stay until the bitter end, attend the drawing for a jersey and be rewarded for our efforts with that very Joaquin Arias jersey.  Or, better yet, that of Luis Castillo.  Or Oliver Perez.
Oh, and our daughter would contract pneumonia and miss enough school that she would have to repeat eighth grade.
When it got to the fourteenth inning, Jerry Manuel found himself out of pitchers.  He chose to bring in Oliver Perez.  That is when the atmosphere at CitiField truly became surreal.
While his entrance into the game during any kind of meaningful game would’ve been greeted with frustration and anxiety, on this day the zeal of the crowd was palpable, the smattering of fans present obviously relishing the opportunity to heckle this pitcher who, by declining to go back down to the minor leagues during the season as he arguably should have done, managed to do no more than occupy a roster spot and collect his hefty paycheck for most of the season.
The gaiety and volume only increased as Perez’s outing very quickly started to unravel.  Accompanied by sarcastic chants of “MVP!  MVP!” Oliver Perez proceeded to hit one batter and walk in three batters, resulting in walking in the go-ahead run.
While razzing Perez felt a little mean-spirited, Howie Rose and Ed Coleman were there to remind anyone listening and having such sympathies that Oliver Perez had brought every bit of this groundswell of un-support upon himself.  (Presumably having to catch a plane himself and not having been promised a game-used, autographed player jersey, Wayne Hagin had already exited the WFAN broadcast booth.)
I sensed that the merriment of the crowd stemmed not only from the opportunity to heckle Perez but also from the fact that, at this point in the proceedings, many fans were just as glad to have the game come to an end, even if that meant Perez having a predictably putrid outing to give the game away.
It was not lost on many of us the irony of a poor showing by Oliver Perez serving as the 2010 season denouement.
And so came the fourteenth inning stretch and, without the Mets scoring at the bottom of the 14th inning, the game, the season, and–finally–the wait for the jersey lottery came to a close.
After being summoned into the Mets Press Room–the very same room in which Jerry Manuel had just given his final post-game press conference–the marketing staff proceeded to call each invitee up to the stage, one at a time, to draw from a Mets helmet one of the slips of paper upon which a player’s name had been written.  Because my daughter’s entry ticket was stamped with the number one, she was the first to pick. 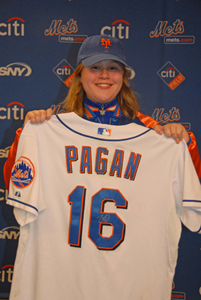 As my husband and I held our breath, she reached in, took a slip of paper, smiled, and read aloud in a clear, excited voice, “Angel Pagan!”
No offense, Joaquin Arias, but Angel Pagan is definitely my favorite player and one of my daughter’s top three favorites.  Following each fantastic diving catch he made this season, along with each of his extra-base hits, she and I were right there in Section 319, waving our arms up and down slowly in our “angel wings” salute.
If he hadn’t been a beloved player of ours before, he would’ve been once we learned what a devoted father he is.  Because of his concern about a serious eye condition for which his two-year-old daughter Briana is being treated, Pagan was not in the lineup on September 17th so that he could–with the Mets’ approval–be part of a doctor’s consultation regarding his daughter’s condi
tion, along with his wife.
Ten days or so later, the night before his daughter was to undergo surgery, Angel sat out of the lineup and stayed home to be with Briana.  He was then at the hospital the next morning, bright and early.  After the surgery had taken place and presumably gone well, Angel was back at CitiField later that day and was in the lineup for both games of a double-header!

After all twenty-five jerseys (none of which were Castillo’s or Perez’s, by the way), had been claimed, photographs were taken.  Outfielder Chris Carter stopped by to greet and pose for pictures with fans.
It was almost dark when we returned to our car in the practically empty CitiField parking lot.  I asked my husband and daughter if I could take one last  parting shot.  They acquiesced, proudly holding the very jersey Angel Pagan had played in not even an hour before, grass- and dirt-stained, and featuring his signature on his number.
How strange it felt to leave CitiField for the final time of the 2010 season feeling so ebullient. Considering how the team had fared this season, I assumed I would feel sad and empty.
The reason for my upbeat mood, I rationalized, was the excitement of having received the jersey.  Nothing more, nothing less.  But I couldn’t help but think that there was something more.
Perhaps the game we had just sat through, with Oliver Perez serving as an unintentionally humorous coda to the somber blues anthem that had played over most of the season, had served as a catharsis of sorts.  Could it be that forcing myself to sit through that entire ludicrous game had helped me and perhaps other fans purge some of those latent negative feelings brought on by the season just concluded?

There’s always next year.  And we’ll have a new Manager and General Manager.  And we’ll see those same young, home-grown players that made a lot of this season exciting.
And we’ve got that angel in the outfield.