One of countless things I cherish about being a parent is being provided the opportunity to expand my knowledge and to be taught things from my child.  This past week I learned something about baseball history from my daughter.

My daughter is an avid reader of historical fiction.  Several years ago, at about the age of seven or eight, marked the start of her immersion into the cult that is American Girl.  Although she does read other novels based on actual history, the American Girl book series remain favorites.

For the uninitiated, the American Girl series of books each feature stories depicting fictional characters; each series is set in a particular period of American history, from colonial America to the present.  Each series’ title character has a corresponding doll–and accoutrements, but of course–linked to her.

The American Girl empire has reached Disney-esque proportions with specialty stores–amusement parks would be a better description, actually–in half a dozen cities in this country.  These stores sell dolls, doll clothes, and doll furniture, but in addition, each store features a theater in which musical productions may be seen around the clock, and a cafe–catering to birthday parties and with tiny “high chairs” so that customers and their dolls may dine together.

Each store also has a hair salon just for dolls.  I kid you not.  While shopping in the store, I have seen some (well-loved) dollies having some pretty bad hair days, so I suppose it makes sense.

Although my daughter has certainly told me many things about the various characters’ escapades and challenges unique to the time period in which she “lived”, I have myself read only a few of the books.

Several of the series of books have spawned full-length movies, the latest of which–“Kit Kittredge”–opened in select cities on June 20th and nation-wide yesterday.  The title character is a nine-year-old aspiring journalist who lives in Cincinnati during the 1930s.

I attended a showing with my daugther–accompanied by her Kit doll and a friend bearing same–the first week it opened in New York.

I was most impressed by the film’s representation of the hardships of The Great Depression.  Although the realities of that dark period of American history were not sugar-coated, the title character’s indomitable spirit and courage in the face of misfortune put a very positive spin on the tale.

By now, I’m sure you’re wondering, “Yes, but what does all of this have to do with baseball history?


I’m getting to that; stay with me here. 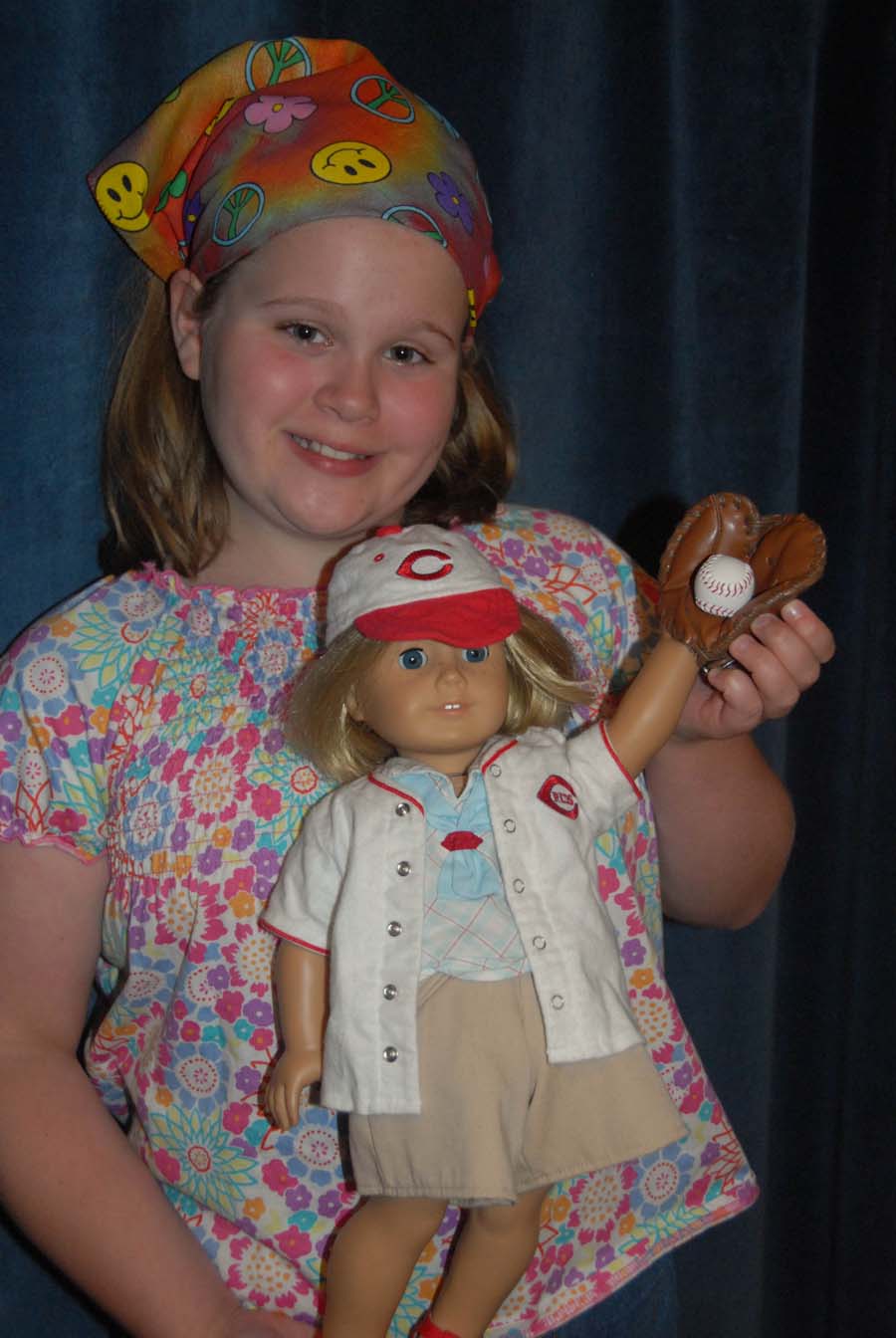 One of Kit’s personal interests, mentioned in the books and touched on in the film, is baseball.  My daughter informed me that Kit, a catcher, played baseball herself.  I already knew, from one of the many outfits acquired for this doll by my daughter, that Kit was a big Cincinnati Reds fan.

A reference was made in the movie to a newspaper clipping that Kit had saved.  The clipping featured a picture of one Ernie Lombardi, wearing a Cincinnati Reds uniform, holding seven baseballs in one hand.

I later asked my daughter if she knew whether Ernie Lombardi was a fictional character or if he had truly existed.  While she confessed to not knowing for sure, we both are aware of the fact that that while the characters of the American Girl books are purely fictional, their experiences are historically accurate, often including references to real people, e.g., Presidents and sports figures.  The books often make references to pop culture of the era as well, e.g., popular songs, dances, and recreational activities and games.

A Google search instantly revealed not only the existence of Hall-of-Famer, Ernesto Natali Lombardi, born in Oakland, California, on April 6, 1908, but other interesting facts as well.  Further searching even turned up the aforementioned photograph of Lombardi and the seven baseballsl!

Fellow Reds player Johnny Bench would turn this same trick years later, by the way.  However, rumor has it that he used some kind of sticky device as a crutch…and, obviously, it was not an original stunt.

As mentioned in the movie, Lombardi–a catcher–was dubbed “Schnozz” in his rookie year with the Brooklyn Dodgers. Not only was his nose of large proportions, but his physique was equally plus-sized.  No doubt for that reason, he was known for being slow on the basepath.  Apparently, he was once described as being as slow as a “man carrying a piano, and the fellow tuning it”.

Hitting for power was a necessity for Lombardi, given his lack of speed.  Wary opposing pitchers kept their distance when he was at the plate–even if infielders were confident playing him on the outfield grass.  One of Lombardi’s line drives even broke three fingers on the glove hand of Cubs’ pitcher Larry French.

Lombardi went on to play with the Boston Braves and the New York Giants, retiring in 1947.  He was elected to the Hall of Fame by the Veterans Committee in 1986.

Ernie Lombardi died in 1977, well before author Valerie Tripp penned her series of Kit Kittredge books, much less the release of the film based upon the books.

I wonder what this colorful character would’ve thought of his being immortalized in such a way!